Although I do all of my reading online now, I’ve always been a fan of print media, and especially magazines. I love thumbing through their glossy pages while standing in line at the carryout or waiting for my appointment at the doctor’s office.

One magazine I’ve always found particularly entertaining is US Weekly. They have this very amusing reoccurring article called “Stars: They’re Just Like Us!” where they show pictures of celebrities doing things that everyday people might.

…or getting parking tickets!

While I haven’t seen an US Weekly in quite some time, I was reminded of this article series at the end of last year when a celebrity – native to Chicago – got lost during his visit to the Richard J. Daley Center.

If you’ve never been to the Daley Center before, picture a 30-story building with 2 additional subterranean floors, 2 main floor entrances with 12 revolving doors through which to enter, and 5 additional underground entrances.

And once you’re in, it doesn’t get any easier because there are essentially no signs to point you in the right direction due to the building’s historical landmark status.  Even if you know exactly where you need to go, it will still be hard to get to your destination because you’ll have to figure out which particular elevators, escalators, or combination of the two you ‘ll need to take to get there.

While the program serves the same mission at all of its sites: making the courts a more welcoming environment for people without lawyers, the way that the JusticeCorps members accomplish this mission varies slightly from site to site. At the Daley Center, the JusticeCorps members give court patrons directions to courtrooms and offices in and near the Daley Center. They also provide invaluable legal information to people without lawyers so that they can better understand their court cases. JusticeCorps members also provide support as well as referrals to the many court-based help desks and other services at the Daley Center – while we are lucky to have such a wealth of free legal assistance in Chicago, it can often be hard to figure out where to start, so JusticeCorps helps by triaging court patrons to the appropriate service.

So, I bet you’ve been wondering how this is related to a celebrity gossip magazine. Well, remember when I said that there was a Chicago celebrity who got lost at the Daley Center last year? Well, as it turns out, sometimes stars get Lost and need directions…

That’s right, Chance the Rapper and his fiancé came to the Daley Center at the end of last year to get a marriage license. After ending up in one of the long halls of the pedway in the basement of the building, they stopped to ask an Illinois JusticeCorps member where to go. They got directions to the County Clerk’s office, obtained their marriage license, and are now happily married. 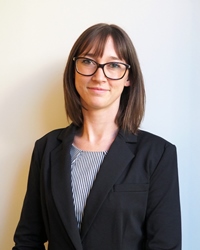 Cortney Redman joined the CBF staff as the Illinois JusticeCorps Regional Coordinator for Cook County in October 2016. The JusticeCorps program enhances access to justice for the growing number of unrepresented people in the courts by empowering and training student volunteers and AmeriCorps members to help people without lawyers navigate the court system. As Regional Coordinator for Cook County, Cortney is responsible for overseeing all aspects of the JusticeCorps sites located at the Richard J. Daley Center, the Cook County Sixth Municipal District Courthouse in Markham, and the Nineteenth Judicial Circuit Court in Waukegan.

Before joining the CBF, Cortney worked for the Chicago Legal Clinic, Inc., where she handled both immigration and domestic relations cases. In addition to maintaining her caseload, Cortney also served as Staff Liaison to CLC’s Auxiliary Board. An active member of her community, Cortney has been a volunteer at both Universidad Popular and Albany Park Community Center, assisting in teaching English as a Second Language and Adult Basic Education.

Originally from Ohio, Cortney has lived in Chicago since 2011. She currently resides in Humboldt Park, where she and her partner own a home and two dogs together.

Registration is open for this fresh, new event aimed at bringing judges and lawyers together to share tips on effective court strategies, etiquette, writing for a judge, and more. Learn more at www.chicagobar.org/cle or 312-554-2056.
RSVP at www.chicagobar.org. We hope you join us and thanks to our fabulous sponsors!
ND of IL Judge Sharon Coleman and Magistrate Judge Sunil Harjani will be giving out their best practice tips to young lawyers on 12/10, 12:00-1:00 PM, at the CBA over "Lunch with a Judge." Members register for free at www.chicagobar.org/cle.
Join us on Thursday!
IP Lawyers: See you Wednesday!
Please join the YLS Women and the Law Committee at its next meeting on November 12, 2019, 12:15 p.m., at The Chicago Bar Association. Global Talent and Career Management Consultant Betty J. Flasch will discuss taking control of and managing your career. The live Webcast can be found at www.chicagobar.org/cle. No pre-registration is necessary.